A week away on the Limestone Coast

When was the last time you visited the Limestone Coast? Never been? You don’t know what you’re missing.

From Adelaide, head to Tailem Bend on the South Eastern Freeway before making a giant loop that takes in the region’s best attractions. Take the coastal route on the Princes Highway to Meningie then travel alongside the Coorong National Park. This vast and precious system of saltwater lagoons near the Murray Mouth was the inspiration for Colin Thiele’s classic novel Storm Boy.

You’ll know you’ve arrived at Kingston SE when you see Larry The Lobster, one of Australia’s iconic “big things”. Climb up 125 steps at the nearby Cape Jaffa Lighthouse (now a museum) and you’ll also get great views over the town’s serene beaches.

Robe was once South Australia’s second busiest port and the Robe Customs House explores this history, including the thousands of Chinese immigrants who landed here and walked to Victoria’s goldfields. Today it’s a popular family holiday destination and a strong food culture means it’s one of the best places to taste fresh seafood along with local coffee, wine and beer.

The stretch of coast between Robe and Beachport has some of South Australia’s loveliest beaches including those in Beachport Conservation Park. If you want to escape the waves, head to the dunes on the edge of town where the hypersaline Pool Of Siloam is the perfect spot for a gentle float.

Heading inland, the Millicent Gallery exhibits works by local and touring artists. Nearby Tantanoola lends its name to a cave system you can explore and the Tantanoola Tiger, a classic piece of South Australiana made famous by Max Harris’ poem.

Near the Victorian border, Mount Gambier is most famous for its Blue Lake that turns a stunning cobalt blue in the summer months. The limestone sinkholes that dot the region are also worth visiting: Umpherston Sinkhole has been turned into a sunken garden, while the 47 metre deep Little Blue Lake is a public swimming area.

Loop inland on your way back to Adelaide through Penola, where Mary MacKillop began her path to sainthood. The quaint town full of heritage-listed buildings is easy to explore on foot and is the best base for visiting the Coonawarra wine region. Famous for rich terra rossa soil that produces sought after cabernet sauvignon, the region’s two dozen cellar doors also have plenty of other delights.

Further north in Naracoorte, you’ll find South Australia’s only UNESCO World Heritage Site at the Naracoorte Caves, where you can take a tour to see some of the extensive fossil collection in situ. Continue north on the Riddoch Highway directly through the Padthaway wine region and visit the Padthaway Conservation Park to see a remnant forests of gums acting as a haven for native wildlife.

Climb the granite outcrop of Mount Monster for views over the surrounding bush and farmland and keep your eyes on the ground to discover a profusion of orchids in spring. Then rejoin the Dukes Highway at the small farming town of Keith before passing the famous silo mural in Coonalpynon the way back to Adelaide.

Travel Tip: Adjust your travel plans according to the weather; head to the coast when the sun’s out and save the caves and wineries for rainy days.

Click here to find a map of the Limestone Coast and start planning your drive. 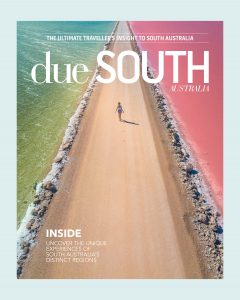 A week away in Yorke Peninsula